Upcoming ABC trips and events for 2022

All trips open to anyone, free of charge (gas costs for carpooling on long trips may be shared). See below for our currently planned trips and activities, please check back later for more or changed trips or details. We may also have additional trips with short notice through the birding club Google group email. We request that people minimize conversation when we’re actively birding as a group (harder to hear and focus on the birds).

New birders are welcome on all trips and activities!

We’ll meet on Riley Road in Sabattus at 8:30 am (directions below). It’ll be roughly a half-day trip, after Riley Rd, we’ll stop by the south-end boat launch and Martin’s Point Park. Note that Sabattus Pond is often colder than you’d expect, particularly if there’s a wind out of the northwest. Scopes are needed to see most birds well. There will likely be multiple scopes there that we can share. At Riley Road, we’ll walk down the moderately steep bank, then along the cobbly beach for about 500 ft, to get closer to where many of the ducks typically are located. There’s an outhouse at Martins Point Park.

Sabattus Pond is the best place in south-central Maine to see a good variety of ducks, large numbers of some, and the possibility of unusual or rare birds. It has the largest concentration of Ruddy Ducks in Maine (about 1000 at peak levels in the Fall). There are normally a couple hundred Scaup, both Greater and Lesser. If they’re close enough, we can probably tell them apart. More unusual ducks like Northern Pintail and American Wigeon are often there.

Directions: Riley Road is a small residential/lakeshore road off Rte 126 in Sabattus. After a sharp right turn with the lake on your left, go about 500 ft and park on the right, next to the fenced-in small utility building (but not in the posted area behind and to the left). Google map location here.

Seven of us had a spectacular day on Saddleback. And the birding was good too!

We heard Bicknell’s Thrush but they were elusive to see. The highlights were nice looks at Yellow-bellied Flycatchers, Winter Wren and Canada Jay.

Howard reports that it was well worth getting up at 4:00 am!

Thanks to Howard and Brenda for organizing and scouting the trip.

All 15 or so of us on Monday’s Sabattus Pond trip enjoyed the mild sunny weather and calm winds which made it pleasant to stand on a beach in November and scan for ducks. Waterfowl was our main goal and we were able to see 13 species, including good but distant looks at a Redhead and close looks at a pair of Northern Pintails. Other ducks etc. included close to a thousand Ruddy Ducks, lots of Greater and some Lesser Scaup, Black Duck, Common Goldeneye, Hooded Merganser, Common Merganser, Ring-necked Duck (which should be called Ring-billed Duck), Bufflehead, Canada Goose, and Mallard. For a couple of the trip lists with some pictures:

Several ABC members braved the high seas (was actually fairly calm that day) in hopes of seeing the Red-billed Tropicbird at Seal Island. It’s a rare bird in the North Atlantic but one bird has been returning to Seal Island (south of Stonington) for a dozen or so summers. It can be disappointing to focus an entire trip on one bird and we did expect to see other good pelagic species. Happily, the Tropicbird did make an appearance and we also saw Great Cormorant (unusual breeders in the U.S.), Razorbill, Atlantic Puffins Common Murre, Manx Shearwater, Wilson’s Phalarope, and Arctic Tern among others.

Ten of us had a good day birding in the north woods, on and near the Long Falls Dam Road near Flagstaff lake. We saw 58 species overall and a good variety, though fewer true boreal birds than we were hoping for. Highlights included Mourning Warbler, Boreal Chickadee, and Black-billed Cuckoo. 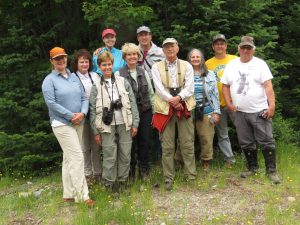 One of the goals of our trip was to document evidence of breeding for the Maine Bird Atlas, a 5-year statewide project. We were able to confirm breeding for several species, including finding a Yellow-bellied Sapsucker nesting hole with adults actively feeding young and a hanging lichen nest woven by Northern Parulas, also with active feeding going on. We found at least some breeding evidence for 14 species of warbler. For some pictures plus site lists, see the below links:

Monhegan Island, May 2018: Eleven of us had a great time on Monhegan (except for the rough ride over) and spent most of the day out there. We saw 58 species of birds, including Blackpoll Warbler, Tennessee Warbler, Blue-gray Gnatcatcher, Philadelphia Vireo, and Puffin and Northern Gannett on the trip back.

Much gratitude to Howard Lake for initiating the trip and gathering information from several recent visitors there, so we could make the most of our time on the Island. All birders agreed that we should make this Monhegan trip an annual ABC event.

Long Falls Dam Road Trip near Flagstaff Lake, March 2018: 12 birders traveled to Somerset County on a quest for crossbills and other boreal species.

We were thrilled to observe a total of 24 Red Crossbills and 5 White-winged Crossbills – more Crossbills than any of us had ever seen in a single day. Also fun to see were 44 Pine Siskins, 12 Red-breasted Nuthatches, a Ruffed Grouse, and an adult Bald Eagle soaring overhead – and other more usual species. On the way home, we stopped at the Messalonskee boat launch in Belgrade and were pleased to see a Northern Harrier soaring over the marshes, and a flock of 13 springtime Red-winged Blackbirds flying by.

One of the purposes of the trip was not only to see crossbills, but to record their calls, with the intent of forwarding the sonograms to Cornell Researcher Matt Young for his analysis of which of the ten Types these crossbills represented. The usual “type” for Maine is #10, known as the “Sitka spruce” type and, indeed all of the Red Crossbills were observed in high concentrations of Red Spruce. However, Matt confirmed a Big Surprise – that 4 of the RECRs were Type 3 – a species found usually in the Hemlocks of the Pacific Northwest (but which are also highly irruptive). These Type 3s are apparently only the third time that Type 3’s have been documented in Maine, the first two on Monhegan in the fall/winter of 2012/2013.

Here is a link to Matt Young’s article discussing irruption and the ten types of crossbills, as well as links to calls for each type: https://ebird.org/news/crossbills-of-north-america-species-and-red-crossbill-call-types/

Our photos of crossbills may be seen in this eBird list:
https://ebird.org/view/checklist/S43351829

We had a great day for our Morse Mountain/Seawall Beach on August 2017. Thanks to Doug Suitor for leading the trip. Highlights included a nice variety of species, including Northern Gannett flying offshore, Baird’s Sandpiper, and large numbers of Sanderlings. For a full list and some pictures:

We had a fun day of birding at Kibby Mountain, June 2017. Quite an adventure as you take a right just before Quebec and go 10 miles down logging roads to the trailhead. Fifteen of us made the trip.

Despite the wind and the heat, which probably kept some of our target birds well hidden, it was a wonderful day for a fairly bug-free hike with some great people. The highlight for many of us was the very cooperative Mourning Warbler along the Gold Brook logging road. This is a difficult bird to find, let alone photograph. Another highlight was hearing Bicknell’s Thrush at the top, amazing for the middle of the day and so warm and sunny. We had 35 species for the trip, including Blackburnian Warbler, many Blackpoll warblers (most heard, not seen), Swainson’s Thrush, Philadelphia Vireo, Yellow-Bellied Flycatcher, and Rusty Blackbird.